SafeCare BC Success at BC Care Providers Conference 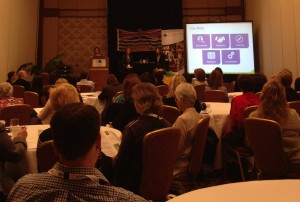 It was a full house at the SafeCare BC-hosted concurrent sessions at the BC Care Providers Conference this week in Whistler. Wynona Giannasi of HoweGroup presented to an attentive crowd the results of SafeCare BC’s Training Needs Assessment. Highlighting key findings, she noted that employers and front-line staff share the same concerns, with violence prevention, safe resident handling, and dementia care the top three priority areas for both groups. The executive summary of the Training Needs Assessment can be accessed here.

Jennifer Lyle, Executive Director at SafeCare BC, moderated a well-attended panel on the role of collaboration in promoting workplace safety. Featuring panelists Debbie Yule, Vice President of Industry Training at go2hr, and Maria Howard, CEO of the Alzheimer Society of BC, the session received strong audience reviews. During the session, Yule described how go2hr successfully incorporates industry feedback to create robust training programs. Howard presented the case for the SafeCare BC-Alzheimer Society of B.C. partnership, and Howard and Lyle fielded questions on the co-hosted upcoming dementia care workshops for long term care workers. 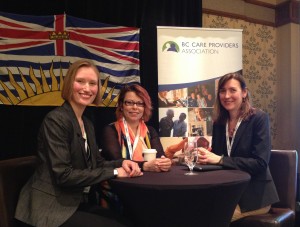 Jennifer Lyle, ED, moderates a panel discussion including Debbie Yule, Vice President of Industry Training at go2hr, and Maria Howard, CEO of the Alzheimer Society of BC

To wrap up the day’s series, Lyle hosted a sold-out session on SafeCare BC. During the session, Lyle outlined the vision for SafeCare BC and the long term care industry. She described how SafeCare BC would support the industry in reducing injury-associated costs and enhance quality of care through training, safety snapshots, awareness campaigns, and engagement initiatives. She encouraged audience members to engage with SafeCare BC, noting that SafeCare BC is directed by its members. Feedback from session participants was extremely positive, with many expressing interest in getting involved with SafeCare BC’s initiatives.

Thank-you to all those who attended the sessions. If you have any feedback or questions on the session discussions, please feel free to contact Lyle directly at info@safecarebc.ca.