The snow and icy conditions have been a struggle for many of those who are providing care, and SafeCare BC has been working to raise public awareness of the impact on homecare providers. In response to our recently issued news release, several media outlets have been interviewing both our Executive Director Jennifer Lyle, and SCBC members in the field affected by the cold weather. Among the media appearances were a prime time story on Global BC News Hour (see video here), CBC Radio On the Coast (listen to the interview clip below), News1130 Radio, Daily Hive and CKNW News.

Icy conditions cause spike in homecare worker injuries: SafeCare BC

Sidewalks covered in ice and snow — thanks to a recent blast of winter and colder temperatures — have wreaked havoc on residents of the Lower Mainland. 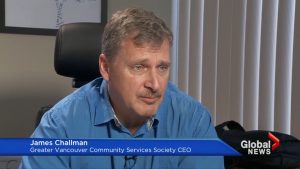 From icy bridges and sidewalks to free salt mayhem at Vancouver fire halls, the spate of snow and cold weather is now impacting the province’s homecare workers, particularly in Vancouver.

Slips and falls are currently the second-leading cause of injuries for staff working in the homecare sector, according to SafeCare BC.

One local care provider, the Greater Vancouver Community Services Society, reports they have had a 600 per cent increase in injuries in December compared to the previous month. In November, the society said it recorded seven incidents compared to 41 in December.

“It is critical that homecare workers can get around safely throughout the region to ensure they can provide the vital care that is required for our elderly population living at home,” Jennifer Lyle, executive director for SafeCare BC said in a statement.

“Reports from our members are coming in that many of their staff are getting injured on icy sidewalks and side streets, which is leading to more WorkSafeBC claims.”

Lyle said they’re “strongly encouraging” both the municipalities and citizens to do their part in keeping streets and sidewalks accessible to care staff, so seniors can maintain their normal activity.

Although care providers have given their staff ice cleats, in many cases SafeCareBC says it’s not enough and that over the past five years the homecare sector has filed 706 WorkSafeBC claims due to slips and falls. Those claims come in at a total cost of almost $6.8 million.

Although it’s a law in Vancouver, some of the worst compliance has been witnessed in the city’s wealthy Shaughnessy neighbourhoods.

Global News recorded about half the sidewalks in the affluent area hadn’t been cleared on Thursday afternoon, four days after the last snow fall and one day before more snow is expected to hit the region. 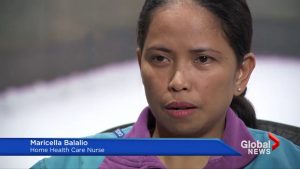 Some residents of the multi-million-dollar homes claim the act of shovelling was too much work, despite knowing about the bylaws.

“We’re trying, but it’s really icy so it’s just hard to shovel,” one woman said while standing in front of her home where neither the driveway nor the sidewalks had been cleared.

Earlier in the week, Jerry Dobrovolny, General Manager of Engineering for the City of Vancouver, said the City is ramping up its response.

Dobrovolny said the City has already used over 7,000 tonnes of salt this year, seven times the amount used last year. He said City crews have been salting “day and night” throughout the holidays.

On any given day, Dobrovolny said anywhere between 14 and 44 pieces of equipment are out cleaning the streets, depending on what the needs are.

He said, because of the increasingly icy conditions, the City had to essentially shut down non-emergency construction work and re-deploy those crews into other priority areas.

Lyle said Vancouver is already facing a “critical shortage” of homecare workers and losing more staff to preventable injuries will only exacerbate the issue.