It’s been an eventful week for SafeCare BC! 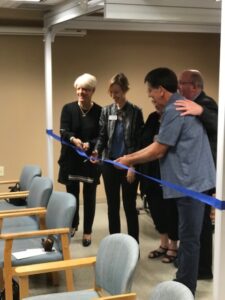 The announcement was picked up by the region’s local media, with the Penticton Herald, Penticton Western News and Castanet reporting the event.

SafeCare BC CEO Jen Lyle appeared on CBC Radio 1’s On The Coast, to speak about underreporting of violence in the continuing care sector.

During the interview, Lyle brings up the importance of fostering a culture of reporting.

“If we have a culture of reporting where people are coming forward, they’re making these reports … the incident investigations are happening, and the follow-up actions are following from that, you will see safer workplaces.”

As Lyle says, “You can’t fix what you don’t know.” By bringing awareness to the issue and normalizing violence reporting, steps can be taken to prevent further incidents.

You can listen to the full segment below.