What You Do Matters: Giving a Voice to Front-line Workers

In 2015, SafeCare BC started the Front-line Communications Working Group in an effort to strengthen the effectiveness of the organization’s communications initiatives, programs, and projects.

As the title suggests, the group is made up of front-line care workers in the continuing care sector who are passionate about being a voice for their peers. 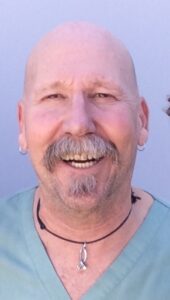 Bryan Gay is a care aide at Menno Place in Abbotsford and has been working in the sector in some capacity for nearly 15 years. He’s also been a part of the Front-line Communications Working Group since its inception.

“Being involved for so long, I’ve watched the changes,” he said. “I think the group that is in there right now gives a really good snapshot of what’s happening on the front-line. We’ve got a lot of good and powerful voices.”

After taking multiple training courses and having been involved with SafeCare BC for the last few years, Bryan knows first-hand what proper training and education can do for someone working in the sector.

“The education that I’ve received has helped me become a better care giver,” he said. “I want to be instrumental in bringing SafeCare BC to care staff, because I believe in what they’re offering. Prior to SafeCare BC, we care workers didn’t really have anything like that.

Bryan started in his position long before SafeCare BC existed, and he’s seen the difference they’ve made, including increasing the engagement of his peers and getting them more involved. He says there is a great opportunity through SafeCare BC for front-line workers to become peer facilitators, as he has done, which helps expand health and safety education to more workers throughout BC.

Based on his experience in the sector, Bryan says it’s imperative that the people who are working with seniors day-to-day are given a voice when it comes to how SafeCare BC operates.

“Being someone who’s out there each and every day, I’ve got a pretty good handle on what care workers are talking about and what the needs are as far as what education should be offered as well as some of their concerns,” he says.